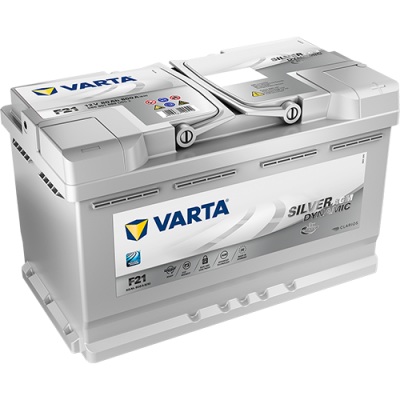 Car battery start-stop Varta VARTA F21 80Ah 800A 12V belongs to the batteries VARTA SILVER dynamic AGM category and has been manufactured according to the highest quality standards. Buy now your battery Varta F21 at telebaterias.com and receive it comfortably at home! Prices without surprises with VAT and shipping costs included Trust the market leading online battery sales website

Delivery service in 24 hours! Receive your battery comfortably at home

Batteries with the latest date of manufacture

The Battery Varta VARTA F21 belongs to the VARTA SILVER dynamic AGM product range and has been designed and built according to the highest German quality standards. Trust Varta batteries just like the leading automakers on the market already do. Car manufacturers such as Mercedes, Audi or BMW rely on * Varta * to power the electrical system of their vehicles.

By choosing a VARTA® Silver Dynamic AGM battery with the most advanced technology, you choose an excellent battery, capable of powering the most demanding vehicles and accessories as it is three times stronger than conventional batteries. VARTA® Silver Dynamic AGM batteries are perfect for advanced Start-Stop systems that require rapid battery recharging using the energy supplied by regenerative braking systems.

If you want additional information, you can download the product's technical sheet at the following link:

The battery Varta VARTA F21 80Ah 800A 12V is compatible with the following batteries from leading vehicle manufacturers:

Are you sure that you want to report this comment?

Your report has been submitted and will be considered by a moderator.

error Your report cannot be sent

Your comment has been submitted and will be available once approved by a moderator.

error Your review cannot be sent